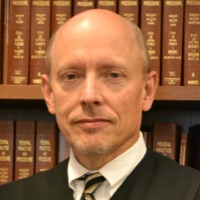 An opportunity for practitioners and students to enjoy lunch in a close setting with Judge Kennelly.

Judge Matthew F. Kennelly was appointed to the United States District Court for the Northern District of Illinois by President Bill Clinton in 1999. Before his appointment, Judge Kennelly worked as an attorney in private practice, representing individuals and corporations in complex civil cases and in criminal cases in trial and appellate courts. In 1996, he was a recipient of the American Bar Association’s Pro Bono Publico award, a Public Interest Law Initiative citation for distinguished public service, and the Mexican-American Legal Defense and Education Fund’s Community / Public Service award. In 1993, the Chicago Chapter of the Federal Bar Association awarded him its Walter J. Cummings Award for excellence in advocacy. Judge Kennelly has been a Fellow of the American College of Trial Lawyers since 1999, prior to his appointment to the bench. Since his appointment to the court, Judge Kennelly has served as the Seventh Circuit’s representative on the Information Technology Committee of the Judicial Conference of the United States and as a member of the Information Technology Advisory Committee of the Administrative Office of the U.S. Courts. In 2019, he was appointed to a seven-year term on the Judicial Panel on Multidistrict Litigation. Judge Kennelly also serves as the vice chair of the Seventh Circuit Criminal Jury Instruction Committee and as a member of the Seventh Circuit Civil Jury Instruction Committee, and he chairs a committee of district judges and lawyers that drafted and periodically updates the local rules for patent infringement cases in the Northern District of Illinois. He has served as president of the Federal Bar Association’s Chicago Chapter, the Richard Linn American Inn of Court, and the Lawyers Club of Chicago. Judge Kennelly received his undergraduate degree from the University of Notre Dame and his law degree from Harvard Law School.