Join the FBA Chicago Chapter’s board members, members, and honored guests as the incoming Chicago Chapter Executive Board and Board of Directors are sworn in for the upcoming fiscal year. Last year over 225 people attended, including 26 judges. 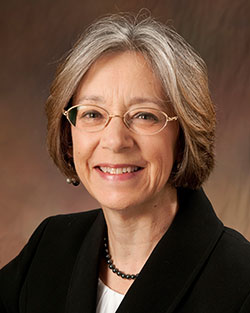 Sponsor a table for ten (or a table for nine and host a federal judge) for $650. An invoice will be emailed to you for payment by check.

Diane P. Wood is the Chief Judge of the United States Court of Appeals for the Seventh Circuit and a Senior Lecturer in Law at the University of Chicago Law School. Chief Judge Wood attended the University of Texas at Austin, earning her B.A. in 1971 (highest honors), and her J.D. in 1975 (Order of the Coif). After graduation from law school, she clerked for Judge Irving L. Goldberg on the U.S. Court of Appeals for the Fifth Circuit (1975-76), and for Justice Harry A. Blackmun of the U.S. Supreme Court (1976-77). She then spent a brief period at the Office of the Legal Adviser in the U.S. Department of State. In 1980, she began her career as a legal academic at Georgetown University Law Center. She moved to the University of Chicago Law School in 1981, serving as a full-time professor until 1995 and as Associate Dean from 1989 through 1992. In 1990, she was named to the Harold J. and Marion F. Green Professorship in International Legal Studies, becoming the first woman to hold a named chair at the school. From 1993 until she was appointed to the Seventh Circuit in 1995, she served as Deputy Assistant Attorney General in the Antitrust Division of the U.S. Department of Justice. Chief Judge Wood is a Fellow of the American Academy of Arts & Sciences and is on the Council of the American Law Institute. She became Chief Judge on October 1, 2013. Chief Judge Wood is married to Dr. Robert L. Sufit. She has three children and three step-children. She enjoys playing the oboe and English horn in several Chicago-area amateur orchestras.