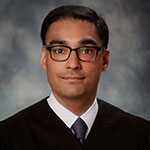 An opportunity for practitioners and students to enjoy lunch in a close setting with Judge Shah.

At Judge Shah’s request, attorneys who are currently appearing before him in an active matter are asked not to attend this event.

Judge Shah was nominated to the bench by President Barack Obama and confirmed by the Senate in 2014. Prior to his appointment to the bench, Judge Shah served as the Criminal Chief of the United States Attorney’s Office in the Northern District of Illinois, having served as a federal prosecutor in the office since 2001.

After graduation from law school, Judge Shah was an associate at the firm of Heller Ehrman White & McAuliffe in San Francisco, and clerked for Judge James B. Zagel (Northern District of Illinois). Judge Shah received his J.D. from the University of Chicago School of Law, and his B.A. in History from Stanford University.