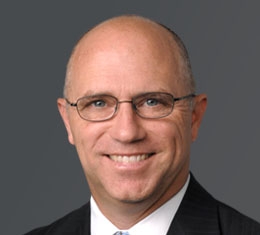 Judge Tharp became a United States District Judge on June 4, 2012. On the recommendations of Senators Mark Kirk and Dick Durbin, President Obama nominated Judge Tharp for the Northern District bench on November 10, 2011, and his nomination was confirmed by the United States Senate on May 14, 2012.
Before taking the bench, Judge Tharp was a partner in the law firm of Mayer Brown LLP specializing in securities litigation, enforcement actions, and investigations. Before joining Mayer Brown in 1997, Judge Tharp was an Assistant United States Attorney in Chicago, where he prosecuted a wide variety of criminal cases.
Judge Tharp earned his J.D. from Northwestern University’s School of Law and received his undergraduate degree from Duke University. He attended Duke on a Naval ROTC scholarship and served as an officer in the United States Marine Corps for five years before enrolling in law school.
Immediately following law school, Judge Tharp clerked for the Honorable Joel M. Flaum on the United States Court of Appeals for the Seventh Circuit and worked at the law firm of Kirkland & Ellis for a short period before joining the U.S. Attorney’s Office.

Attorneys with active matters before Judge Tharp should not attend this event.