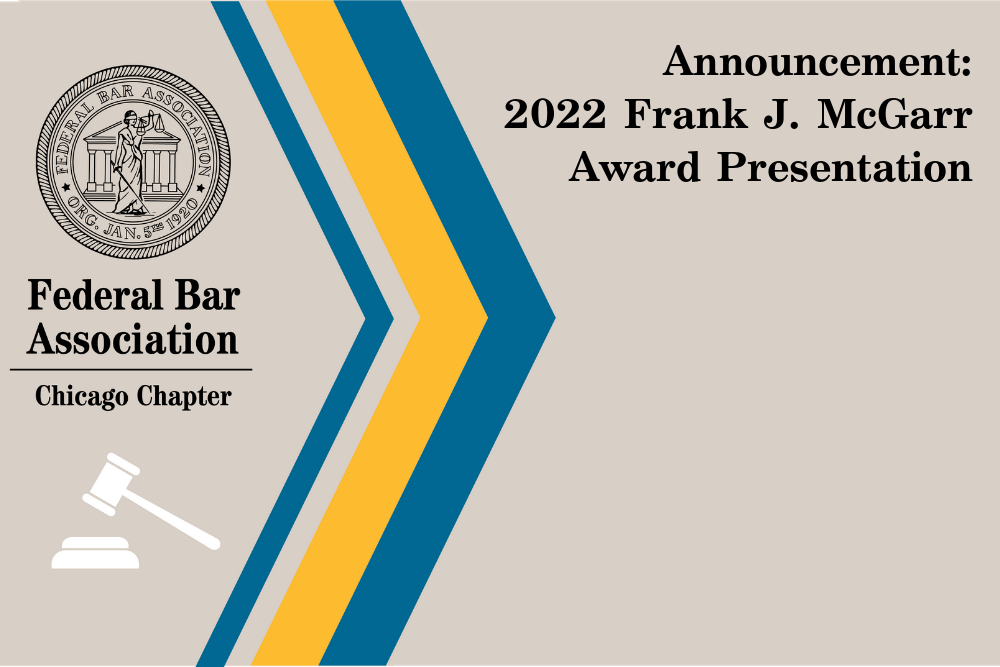 The Chicago Chapter of the Federal Bar Association has announced that it is honoring two Chicago attorneys with the chapter’s prestigious Frank J. McGarr Award for distinguished federal public service by an attorney, with one of the awards being bestowed posthumously for the first time in the chapter’s history.

Mr. Murray was a veteran trial lawyer with the U.S. Attorney’s Office in Chicago, where he successfully tried more than 30 cases to verdict, including complex, months-long trials.  Mr. Murray, who began his legal career as a staff attorney for the U.S. Court of Appeals for the Seventh Circuit in 1976, also litigated significant appellate matters for the government, including the first defense challenge to the constitutionality of “Operation Greylord,” the renowned federal undercover investigation into court corruption in Cook County.  Colleagues also remembered Mr. Murray as an expert in federal procedure, a highly compassionate and fair prosecutor who cared about outcomes for cooperating witnesses and defendants, and a mentor to many younger federal prosecutors.  Mr. Murray joined Johnson & Bell upon leaving the U.S. Attorney’s Office and had a 22-year career there as a partner practicing federal regulatory law, complex commercial litigation, and white-collar criminal defense before his retirement in 2013.   Mr. Murray also devoted his time and skills to civic public service, volunteering with Chicago Legal Advocacy for Incarcerated Mothers, Cabrini Green Legal Aid, and St. Ignatius Parish in Rogers Park, as well as serving on the board of the FBA Chicago Chapter.

“Mr. Murray and Mr. Oswald in many ways have been unsung heroes of our federal system, not seeking out the limelight for themselves, but serving the public with dignity, honor, and dogged diligence for many years,” said the Hon. Kim Soo Nagle, FBA Chicago Chapter president.  “They are worthy recipients of the McGarr Award and walk solidly in Judge McGarr’s tradition and legacy of federal public service.”

Mr. Oswald has conducted or supervised the Chicago U.S. Attorney’s Office’s civil immigration litigation for more than 30 years.  The office’s civil immigration law practice is varied and complex, and Mr. Oswald earned a reputation for broad-based knowledge and skill across the spectrum of that practice.  Mr. Oswald also currently supervises about a third of the U.S. Attorney’s Office’s civil assistant U.S. attorneys.  In 2000, he won the U.S. Attorney General’s Distinguished Service Award for his work on a civil racketeering labor racketeering case against a national union.  In all, he also labors under a daunting caseload.  Chicago federal judges involved in the consideration of this year’s McGarr Awards praised Mr. Oswald for his diligence and versatility in court in these matters.  On immigration, he also won praise for his skills in handling many matters before they reach a courtroom.

“Craig has performed his public service responsibilities with heart,” said U.S. Attorney’s Office Civil Division Chief Thomas Walsh.  “The immigration bar and the court have come to know Craig as a compassionate intermediary between the federal immigration agencies and those seeking relief in court.  His approach is consistently fair-minded.  In fact, the only reason that he is able to handle such a huge caseload is because the majority of his cases are resolved without the court having to decide anything.”